This so called mayor is the most despicable and corrupt politician I have ever encountered. He is so corrupt and abusive he gets his own page. Berkman uses intimidation and defamation to ostracize anyone he doesn’t like and then plays the victim and acts like he has been slighted. The following is all public information acquired from Indialantic Town Hall archives or official Indialantic.com email addresses.

Berkman was asked to attend an Islamic Society event and he refused because of religion. A severe violation of his oath as Mayor, if not completely illegal. 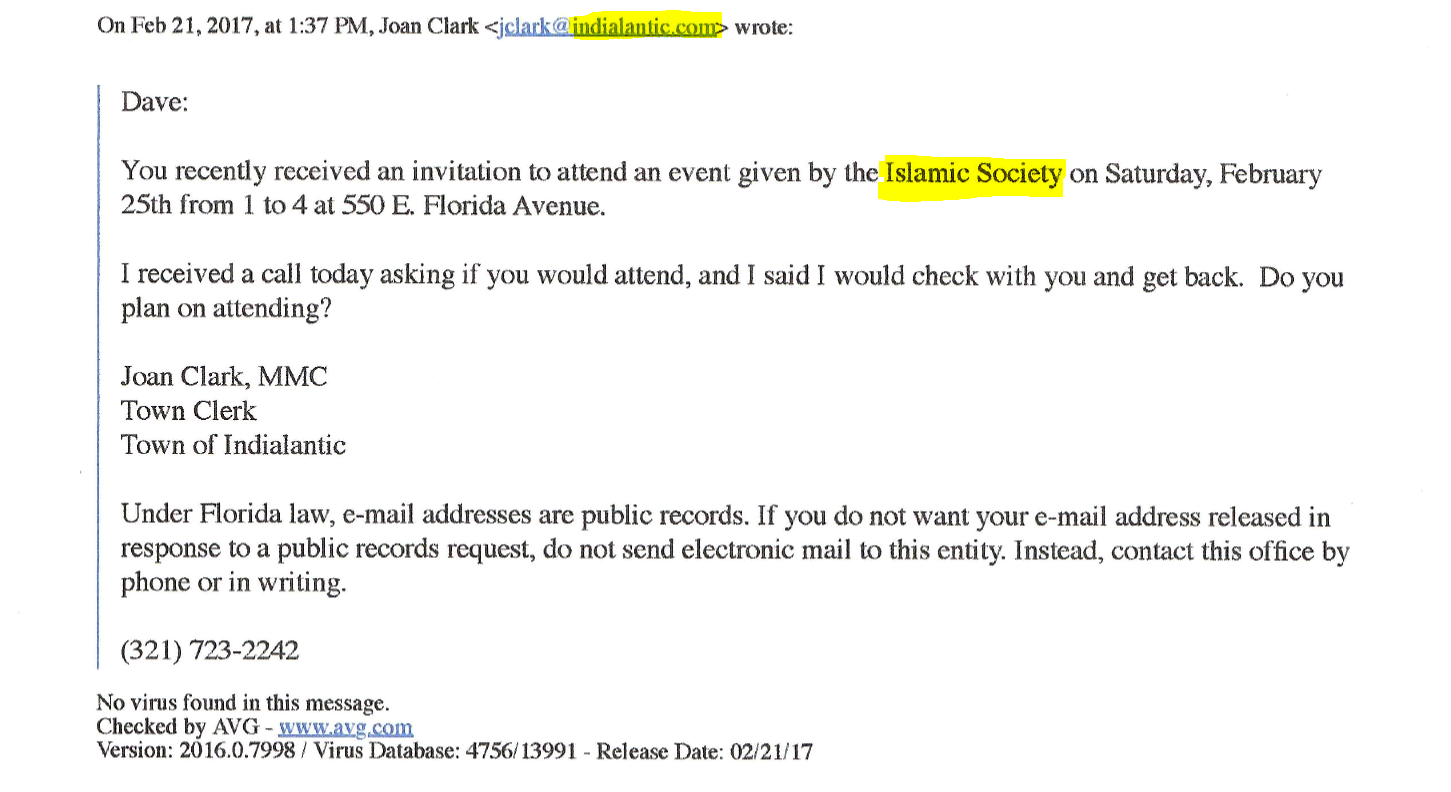 Another tactic Berkman uses is religion shaming. He plays the victim and accuses people of being anti-Semites without provocation. This behavior is used on several residents and council members.

This resident asked about the conditions of the streets and if they would be repaired and got accused of anti-Semitism by Bekrman. 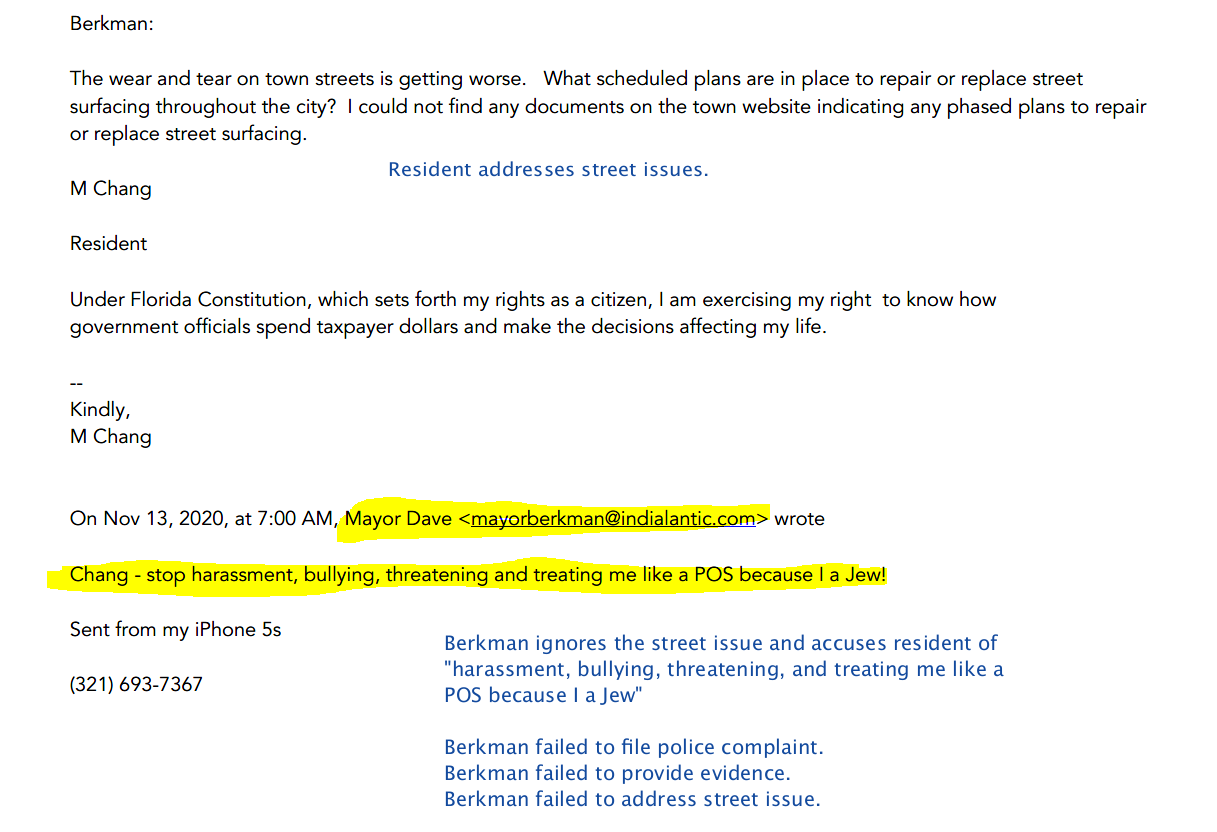 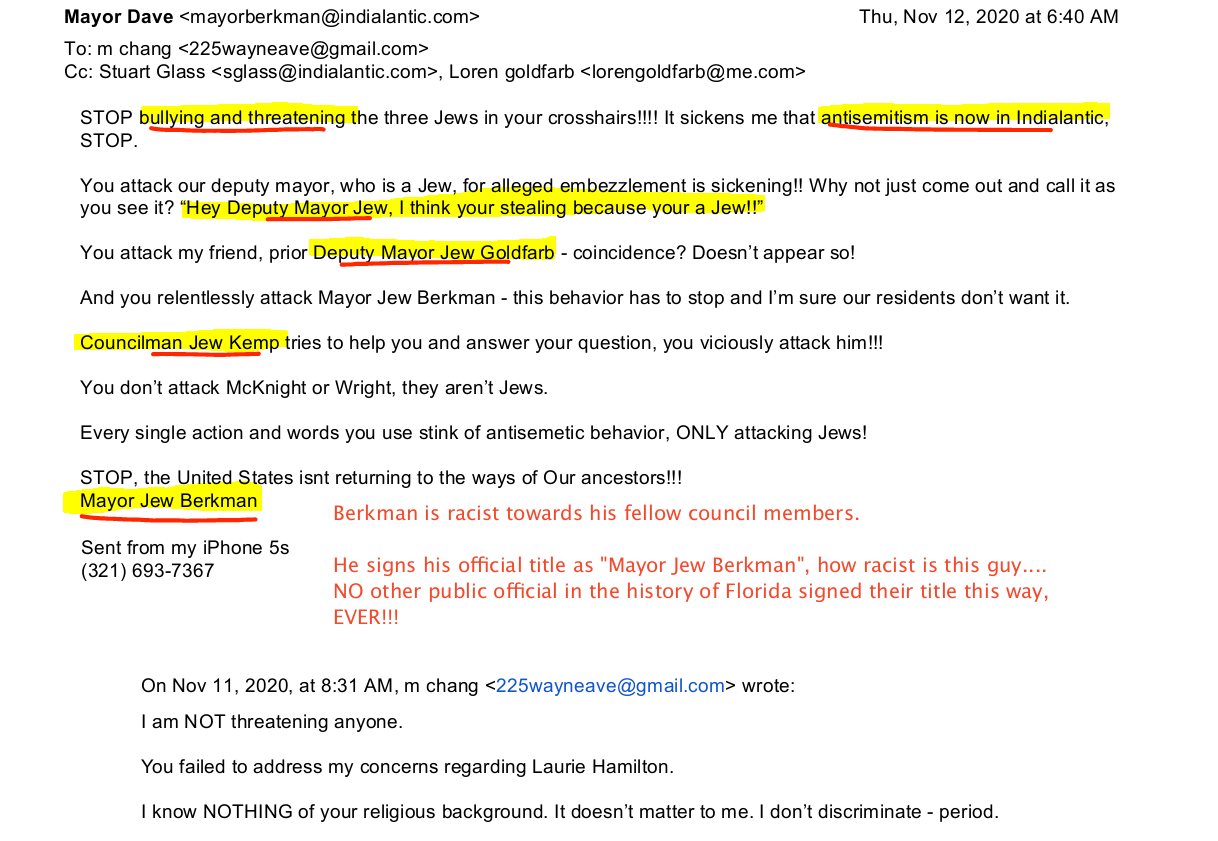 This is a Council Member (NOW FORMER) who Berkman didn’t agree with and used this same tactic on her. She also got accused of anti-Semitism. BERKMAN IS DISGUSTING WITH RACIST BEHAVIOR! 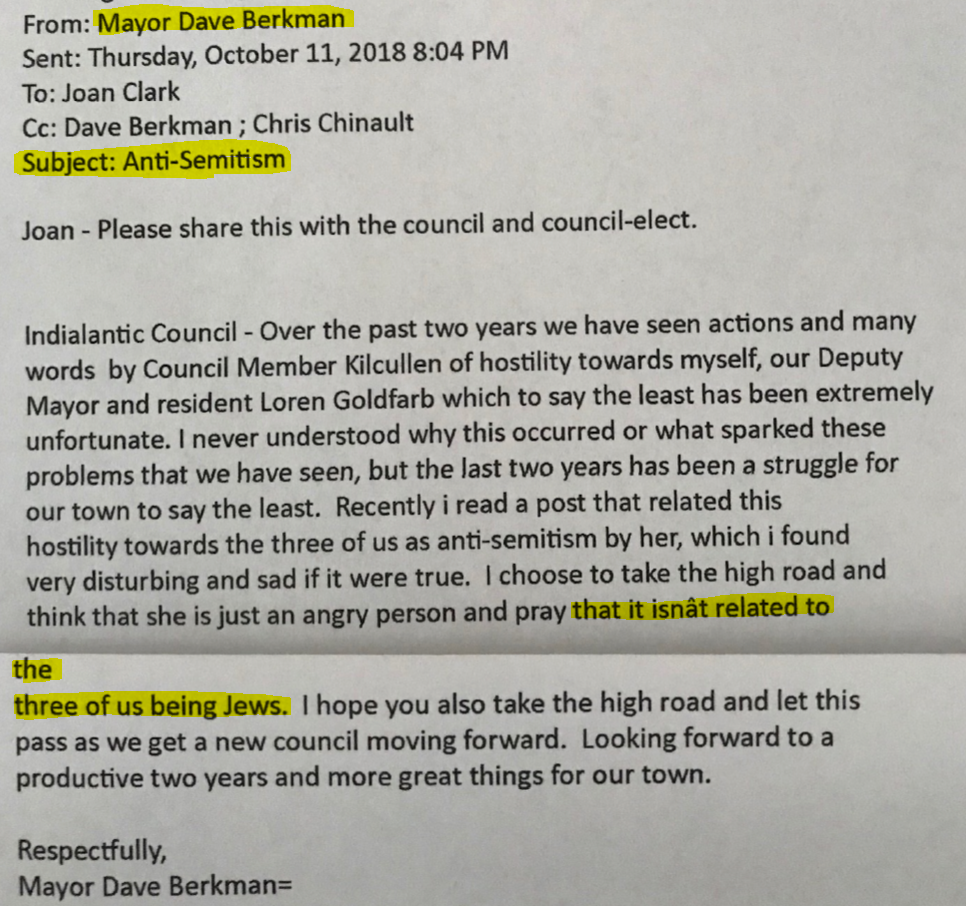 Berkman uses the corrupt Indialantic Police Department to make frivolous police reports and then Chief Mike Connor, LT Webber, SGT Holtsine, and SGT Baker cover for him and make excuses for him. He then uses the Halls and Judges of our county courts to file court proceedings and has a judge sign very weekly constructed court cases and then the Sheriff is forced to remove our 1st and 2nd amendment constitutional right from us. My current count including myself is 5 individuals that he has done this to and as I understand it, there are more.

The most two recent stalking charges are against myself and a former Mayoral running mate of Berkman, Mel Chang. Notice the same exact tactic used on him as Berkman is using on me. ironically, exactly one year apart, almost to the day.

All 5 of the frivolous cases were dismissed, yet all of us got served by the Sheriff, attorney fees, and allegedly one lady in her sixties deemed an existential threat to Berkman by Brevard Courts because of made up and false Indialantic police reports filed by Berkman was put in handcuffs by the Sheriff. Where is the justice in that?

In my case, I recently filed a stalking complaint on Berkman with SGT Baker of the Corrupt Indialantic Police Department on August 24, 2021 and Chief Connors sat on the complaint for “spelling errors” while Berkman called the police on me for simply driving down the street. No crime, no evidence, no interaction with Berkman, Just driving down my own street.

The following two video is at Indialantic Town Hall and police department (Corruption headquarters) and shows Chief Connors and LT Webber taking my statement about Berkman filing a police report that says I confronted him for stalking ME in front of MY HOUSE and calling me a child abuser in front of my 11 year old little girl. Chief Connors is making excuses and covering for Berkman’s lies and and then acting like the injunction filed by Berkman was no big deal. “it’s only a temporary injunction” Connors says. Meanwhile, I have been stripped of my 1st and 2nd amendment constitutional rights while I wait for the courts to schedule a hearing. In part 2, they are forced to take an amendment to Berkman’s false report when I show them video evidence of Berkman’s lies.

Here is another falsified police report with Berkman saying I tried to run him over. This is one of the weak and unfounded reports he used to get the injunction for protection against me. merely drove down my own street to go home and when I passed Berkman nowhere near him and I noticed in my rear view mirror that he was screaming at me. I ignored him and then about 10 minutes later the police in this video showed up at my place.

Video timeline 0:56 – Neighbor says she opened her car door and heard yelling and she heard “I’LL TAKE YOU OUT” This is Berkman yelling that to me. Berkman’s states that I didn’t say anything. Once again, That is what Berkman was yelling when I looked in my rear view mirror. THAT IS A THREAT

Video timeline 1:47 – Berkman suggest to police officer that he might be forced to shoot me and he and his wife smirk. Is he telling the cop to shoot me? THIS IS ANOTHER THREAT.

Directly after the above video, Corrupt SGT Holstine who has been assisting Berkman with his false police reports came to my house and talked to me. This police body cam video below is a recording of that event.

We chit chatted about the house next door and it was a non-event. I can even be heard at then end saying I would never hurt anyone over a shed.

UPDATE! Berkman admitted he had nothing by voluntarily dismissing the case against me. All of the attorneys advised him it wouldn’t end well for him. Of course he did what chickens do and chickened out.

Berkman ultimately voluntarily dismissed the injunction because all of the lawyers told him he had no evidence whatsoever. Same outcome as all of the five other of Berkman’s victims using this same behavior of falsely accusing people of stalking.

Boo hoo hoo, poor me. Here is a weak attempt at a public outcry by Berkman.

Lets be super clear here. Political speech is of the highest constitutional protection.   If he did sue it would be thrown out as frivolous, at which point the mayor not prevailing would be responsible for all attorney fees, expenses and court costs for both sides. The countersuit against ALL INVOLVED including the Town itself would be EXTREMELY costly and would actually have merit unlike the mayors supposed suit.. I am assuming he is taking to social media to find a lawyer because all of the lawyers he spoke to laughed at him. Our team of lawyers found this extremely defensible and are anxiously waiting for the Berkman filing. Welcome to being a corrupt elected official.

I just got off the phone with one Mary D Woods. A former resident of Indialantic. What an earful of alleged corruption intimidation, cyberbullying, cyberstalking and defamation of character of her profession and her relationship with Florida Tech while Town Manager Mike Casey was attending the school with her and Berkman and the police harassed her and her personal family members.

The BRIBERY evidence will be coming soon.